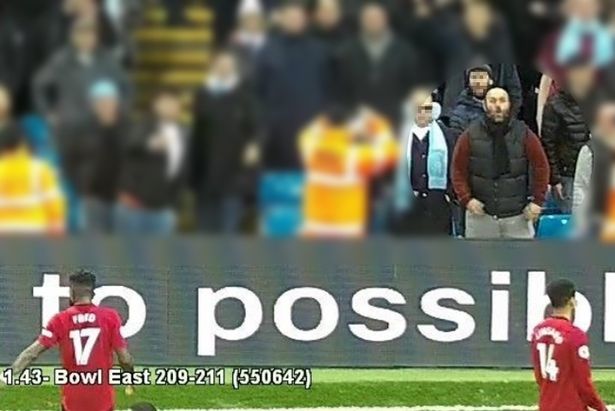 These are the CCTV images which saw a Manchester City fan convicted of making a racist monkey gesture towards United players during a Manchester derby.

It comes as police detailed how their investigation into Anthony Burke unfolded – and it was confirmed he will now be banned from the Etihad Stadium for life.

Burke, 42, made the monkey gesture towards three United players during the league derby at the Etihad on Saturday December 7, 2019 a court heard yesterday (Wednesday).

He was fined £500 and banned from all football games in the UK for three years after being convicted of a racially-aggravated public order offence.

Burke denied the charge, but was convicted by a district judge following a trial at Tameside Magistrates’ Court on Wednesday.

Police have now confirmed their investigation into Burke, from Wythenshawe, began after he was captured by TV cameras making the gesture.

He was arrested the following day and denied racism when he was quizzed by officers.

Burke pleaded not guilty to using threatening, abusive words or behaviour, or disorderly behaviour likely to cause harassment, alarm or distress in a racially-aggravated way.

Crucial to Burke’s conviction, police said, along with witnesses from the ground close to where he was stood, were CCTV footage and still images which showed he was making monkey sounds while making the gesture.

The images, shown in court – and published here exclusively by the Manchester Evening News – showed Burke standing with his mouth open, with both hands raised to his waist.

United players Fred and Jesse Lingard can be seen in the foreground of the images approaching the stadium’s East Stand as United get set to take a corner.

Steward Frank Coulson told the court that he as he and his colleagues stood up for the corner, he heard someone shout ‘get on with it you black b******’.

Get our free M.E.N. Court newsletter

Manchester’s courts are some of the busiest in the country with a vast array of cases heard every week.

To keep up to date with how justice is being served across Greater Manchester subscribe to our free weekly M.E.N. Court News newsletter put together by our court reporters Andrew Bardsley and Amy Walker.

He said he then saw and heard Burke making the gesture, shouting ‘oo, oo, oo, oo’, at the time.

Mr Coulson later said he was ‘100 per cent sure it was a monkey sound’.

The court was told tensions were high in the stand at the time of the incident – in the 67th minute – as United player Anthony Martial made a ‘2-0’ gesture towards the crowd.

Burke, of Panfield Road, Wythenshawe, accepted swearing and gesturing towards the players as a result, alongside many others in the crowd, but denied any racist connotation.

But District Judge Margaret McCormack said she didn’t find it ‘credible that you were responding to the United player in kind’.

“Your team was being beaten. It was like a powder keg,” she added.

“You did act as alleged by Mr Coulson.”

Burke’s three year-football banning order means he will not be able to attend any football game in the UK for three years.

However, the M.E.N. understands that as they have previously indicated, the club will go further and Burke will now be handed a lifetime ban from the Etihad.

Detective Constable Susan Muldowney, of GMP’s Central Park CID, said: “The Manchester derby is a fixture that usually shows the best of Manchester, but that night Anthony Burke appalled the city and the wider football community.

“His frankly unacceptable actions live on TV were witnessed by viewers around the world and it is right that he has finally been brought to accountability for what he did.

“No member of society should face such abuse wherever they are, especially when at their place of work – and this applies for anyone, whether they are a professional sports player or otherwise.

“With fans hopefully continuing to return to stadiums in the coming weeks and months, this conviction is a reminder to anyone who thinks of engaging in such intolerable abuse that we will work robustly to prosecute perpetrators of hate crime and bring them to some justice.”