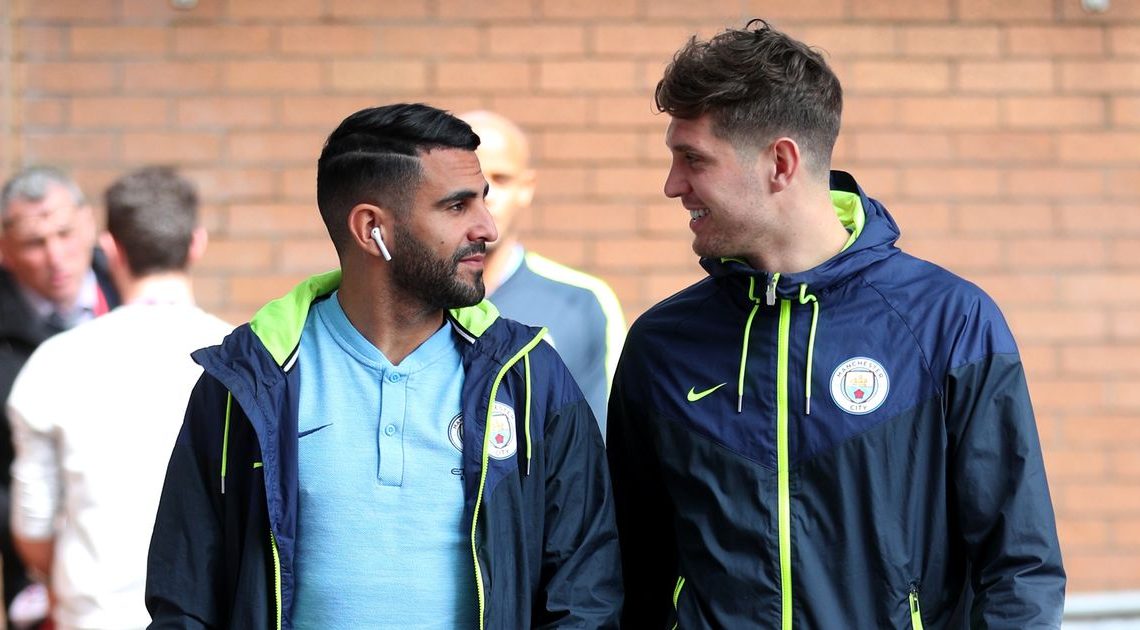 The two Blues were picked up by cameras at half time, having a heated debate as they were preparing to emerge into the Estadio Do Dragao, trailing 1-0 to Chelsea in the final.

That prompted speculation that Mahrez, who pushed his hands into Stones’ chest at one point, was urging the defender to be more aggressive, after the England man had made a nervous start to the game.

But it appears that Stones was making a point to the Algeria star, after Chelsea had exposed City’s right flank repeatedly in the first half – a ploy that had led directly to Kai Havertz’s ultimately decisive goal.

Chelsea’s tactic of getting the ball wide to left back Ben Chilwell early, and hitting Mason Mount as soon as possible, was no great surprise to Pep Guardiola – Chelsea had used it, and scored from it, in the FA Cup semi-final win, just 42 days earlier.

Much had been made of City playing a weakened team in that defeat but, if anything, they looked even more vulnerable to it when they had their first choice back four and goalkeeper out on the field in Porto.

Chilwell had snuffed out the attacking threat of Mahrez by getting tight to the dangerous winger whenever he was on the ball, either to force him to play with his back to goal, unable to turn, or to be pressed into mistakes whenever he tried to carve inside onto his left foot.

Did City get their tactics wrong in the final? Have your say in our comments section here.

But the England left back also performed a valuable attacking role for the Londoners, pushing high up the pitch to stretch City, and making himself available to goalkeeper Edouard Mendy for a swift throw over the heads of the five attacking City players when they tried to press high.

That banked on the fact that Mahrez, either by Guardiola’s instruction or his own decision, was staying high on the pitch, and not tracking the runs of Chilwell.

With Mount and Timo Werner then linking with Chilwell, Kyle Walker and John Stones repeatedly found themselves outnumbered.

In fact, if Werner had not fluffed a great chance, it would have meant City going in more than a goal down.

So dangerous was that combination that, when Mendy’s throw found Chilwell, who then passed to Mount on halfway, Stones, Walker and Ruben Dias were all dragged out of position for fear of being caught out again.

That was when Chelsea hit them with the sucker punch, as Kai Havertz made his diagonal run, flattened to stay onside, with Aleks Zinchenko failing to recognise the danger early enough and then failing to chase Havertz down once it became obvious.

With Stones, Dias and Walker drawn to the right, and Zinchenko not reacting, Havertz had a huge space into which he could run, and for a player of Mount’s quality it was a relatively simple pass that he timed to perfection.

Mahrez’s absence from defensive duties was telling in the first half, and with City pressing hard for an equaliser after the break, the clear notion that he needed to do more defensive work – which Stones seemed to be making – was not tested.

There has been talk that Mahrez, one of City’s best players this season, could be available this summer, as the Blues eye up the sale of at least one big name in order to finance a move for a big-money striker.

Like Leroy Sane before him, Mahrez has improved the defensive side of his game, and his work rate, but whether he has done so to an extent to satisfy Guardiola remains to be seen.