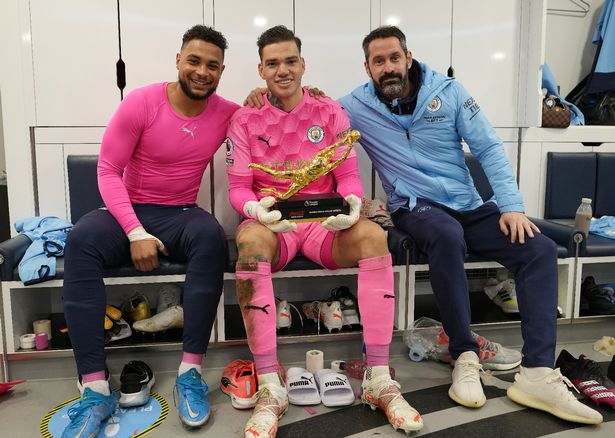 Ederson will be at the head of the queue if Pep Guardiola needs to ask for volunteer penalty-takers on Saturday night.

And the Manchester City goalkeeper gave himself the perfect confidence boost ahead of the Champions League final showdown with Chelsea, by saving Gylfi Sigurdsson’s spot-kick as the Blues demolished Everton 5-0 on Sunday.

Ederson has made no secret of the fact that he would love to be City’s regular penalty-taker, and Guardiola had to admit – after a series of misses from the spot – that he was half-considering the Brazil international as an option.

If the all-English final goes down to the wire, he might have to take one – but Ederson would be happy to be one of the five in the initial round.

He laughs when asked if he will be happy to take one, as well as save some, in the Estadio Do Dragao.

Back in February, Guardiola said that his joke about letting Ederson take penalties had become only a “half-joke” after Ilkay Gundogan became the third player to miss one this season – with Sergio Aguero recently becoming the fourth.

Ederson has reminded Guardiola of his words and makes it plain he will be up for taking one.

Who do you think City’s five penalty-takers should be? Have your say in our comments section here.

“If the final goes to penalties, I’m going to ask to take it because I’m ready for it,” Ederson told the MEN. “In training sessions sometimes I practise taking them like if it was a game.

“It’s true that our scoring rate on penalties isn’t the best, we missed some during the season, but the team is ready for any outcome during the game. I just hope we can win the game and win the title no matter the way.”

His ferocious penalties in the training ground have his fellow keepers wincing every time, as Scott Carson revealed to MEN Sport.

But his main job on Saturday will be to ensure the game does not go to a shoot-out – or if it does, to emerge as the hero.

He warmed up nicely for the role on the final day of the Premier League season by hurling himself to his right to keep out Gylfi Sigurdsson’s effort.

That was his first penalty save in over three years – the last being when he stopped Pierre-Emerick Aubameyang’s effort for Arsenal in City’s 3-0 win at the Emirates.

But his record on penalties – seven saved out of 46 – is twice as good as that of his opposite number Edouard Mendy, who has managed to keep out just two out of 26.

And his own penalty save in the Premier League was from Sergio Aguero’s calamitous, dollied attempt at a Panenka finish in Chelsea’s recent win at the Etihad Stadium.

Ederson was determined to keep out Sigurdsson’s spot-kick, because the whole squad was desperate for a big result to send off Aguero, in his final home game, on a high.

“I saved a penalty on Sunday – after a long time,” he said. “It’s something you work on, you do your preparation before the game.

“I work in every circumstance that can happen during the game. That’s also trained and prepared. It’s good to be prepared in case it happens, be ready to do it. I work hard in every training session to give my best in the match.

“I always analyse the possible penalty takers. I was really happy for saving the penalty and contributing to keeping another clean sheet. It was a great game, a great result and a great celebration for us.

“It was a great way to say goodbye to Aguero, he deserves it for everything he did for the club and for the city.”

Goalkeepers often seem to be the only people on the planet who relish a penalty shoot-out, as it offers the chance to be the hero, but rarely the villain.

And Ederson says it is definitely better to be saving than taking: “It’s a mix of feelings, both for the penalty taker and the goalkeeper.

“I would say it is even better for the goalkeeper, because if the ‘keeper manages to save a penalty, it’s a boost of confidence for the rest of the shoot-out. There are also great penalty takers that they are very difficult to save.

“The biggest happiness for a goalkeeper is to save a penalty. It’s what happened to me on Sunday, that after a long time I saved a penalty again.”