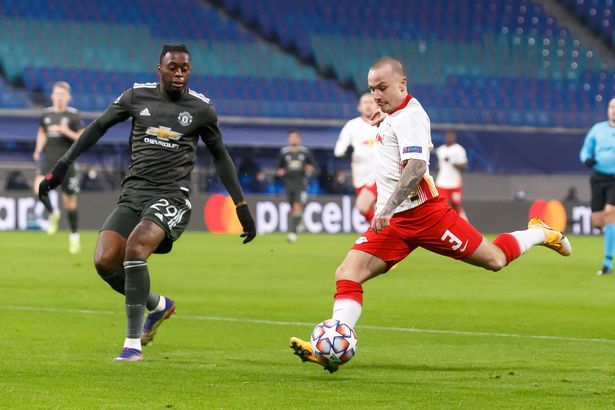 The case of Angelino’s Manchester City career is a curious one.

Having joined City’s youth set-up as a 16-year-old in 2013, the Spanish left-back clocked up a dizzying amount of air miles thanks to five loan moves across the globe before returning to the club in 2019.

After making only 15 senior appearances for City, including a couple of shaky displays in late 2019, he was loaned out to RB Leipzig in January 2020, with the deal becoming permanent in February 2021.

It’s fair to say that ever since Angelino stepped foot in the east German city, he’s looked ten times the player he ever did in Manchester.

20 months on from his final game for City, the 24-year-old will get the chance to prove Pep Guardiola wrong when RB Leipzig face City in the Champions League on Wednesday.

The attacking full-back knows exactly how to hurt City – but they could say the same about him.

Since Angelino moved to Germany he’s set the Bundesliga alight.

He immediately slotted into the left-hand side of Julian Nagelsmann’s defence, predominantly as a wing-back in a 3-4-2-1 system but also sometimes as a more traditional left-back in a back four.

After a promising start to life at Leipzig, in 2020/21 he really kicked on. With full license to bomb forward, Angelino scored four goals and provided four assists in 26 Bundesliga appearances, while clocking up a remarkable three goals and three assists in just seven Champions League games.

One of those goals, a second-minute strike in a 3-2 home win against Manchester United in December 2020, showed exactly how he could hurt City on Wednesday night.

Ghosting down the left as Leipzig countered down the right, the Spaniard latched onto a deep cross before firing a low strike into the bottom corner.

As City have shown in the past – even as recently as Saturday’s win at Leicester – they can be very vulnerable to counter-attacks.

All it takes is for a City midfielder to make a mistake before a well-oiled counter-attacking unit like Leicester or Leipzig rips them apart.

Yes, City kept a clean sheet against the Foxes, but if it wasn’t for a few fine interventions from Ederson they would’ve been in trouble.

Admittedly, the right-side of City’s defence is stronger than the left, thanks in no small part to Kyle Walker’s unbelievable pace and powers of recovery, but Guardiola will still be wary of the threat that Angelino will pose.

Of course, Leipzig are now coached by Jesse Marsch, but they still like to press their opponents while playing quick, vertical passes on the counter. This approach can be very effective against teams that play a high defensive line – a category City definitely fall into.

Last season’s Champions League finalists need to prove they’ve learned their lessons from previous bruising encounters – think Lyon in 2018/19 and 2019/20 – or Angelino could come back to haunt them.

However, there’s a reason City decided to offload Angelino to Leipzig.

Under Marsch, Leipzig have moved away from a back three and now tend to play with a back four, a switch that has exposed Angelino’s defensive flaws.

Without three centre-backs to take care of defensive duties when Angelino bombs forward, the left side of Leipzig’s defence has at times looked incredibly exposed when attacks have broken down. It appears that Angelino has just as much attacking freedom as he did last season, but the consequences of that are now far greater.

In the build-up to Bayern’s third goal in a 4-1 thumping of Leipzig on Saturday, Angelino was nowhere to be seen as Jamal Musiala had all the time in the world to pick out former City man Leroy Sane for a simple finish.

If City weren’t about to face Leipzig, the sight of Angelino playing in a back four would have sent shivers down their fans’ spines. One of the left-back’s final games for City was a drab Manchester derby defeat at the Etihad Stadium, during which he struggled to track back and keep up with the pace and directness of Daniel James, Marcus Rashford and Anthony Martial.

It’s clear that he’s much better suited to the security of a back three system than a back four, probably explaining City’s willingness to let him leave.

If whoever makes up City’s right flank can exploit the space that Angelino will inevitably leave, Guardiola’s men could run riot in their maiden 2021/22 Champions League outing.

How do you think City should deal with Angelino on Wednesday? Follow our new City Fan Brands Writer Alex Brotherton on Twitter to get involved in the discussion and give us your thoughts in the comments section below.