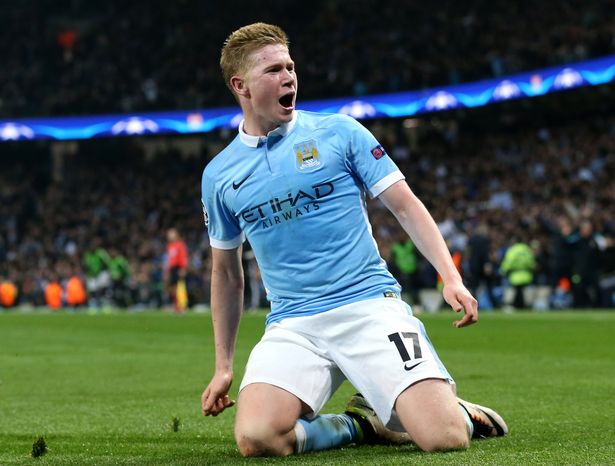 It might not be the sort of landmark you celebrate by sharing cake with friends but on the sixth anniversary of Kevin De Bruyne joining Manchester City from Wolfsburg there is plenty of humble pie to go around.

“THE £60M REJECT,” chortled one tabloid, in reference to De Bruyne ’s previously unsuccessful stab at life in the Premier League with Chelsea.

He returned as the Bundesliga Player of the Year, having become one of the most sought-after creators in Europe, but the Brains Trust on Soccer Saturday still thought they knew better.

“My goodness Jeff, the world has gone mad isn’t it. The amount of money they’re paying for this boy is absolutely bonkers,” a faux-worried Phil Thompson said.

“I don’t see £50milion for this player, I don’t see it at all. Honestly, Jeff, I thought it was lira,” quipped an aghast Paul Merson over the transfer fee.

As De Bruyne posted on Twitter today, those comments are not only six years ago – they are 11 trophies ago too.

Here, we look back a six of Super Kev’s finest moments since arriving in Manchester.

De Bruyne quickly established himself as a focal point of Manuel Pellegrini ’s side, so much so that if he hadn’t missed 10 weeks with knee and ankle ligament damage sustained during the League Cup semi-final against Everton, Leicester City’s improbable Premier League title win might have remained the stuff of fantasy.

City did at least reach their first Champions League semi-final in Pellegrini’s final year in charge, thanks largely to their star attacking-midfielder. De Bruyne was on target in a 2-2 draw in the French capital and, on one of the most memorable European nights the Etihad Stadium has seen, he fired home the only goal of the quarter-final second leg.

Back at the Bridge with a bang

Pep Guardiola ’s first season in charge was a learning experience for all involved, although De Bruyne excelled – again shining on the Champions League stage when his free-kick helped to down Barcelona 3-1.

City began the 2017/18 campaign in authoritative fashion, but they truly showed their mettle with a 1-0 win over Antonio Conte’s Chelsea – a scoreline that did little to illustrate their dominance over the reigning Premier League champions on their own patch. De Bruyne burst from midfield to exchange passes with Gabriel Jesus and thump home the decisive goal left-footed. There was no stopping the Centurions from that point.

City followed up their 100-point campaign with a nerve-shredding title retention, having been pushed all the way by Liverpool. Yet, De Bruyne cut a frustrated figure as he spent spells on the sidelines due to two separate knee ligament injuries.

He made up for lost time with a merciless outing in the FA Cup final, coming off the bench to score, assist and collect the man-of-the-match award against a beleaguered Watford. The 6-0 thrashing ensured City became the first team in English football history to lift the domestic treble.

Guardiola’s men were unable to make it three Premier Leagues in a row in 2019/20, but De Bruyne took his game to another level with a record-equalling 20 top-flight assists over the course of the campaign.

He produced a masterclass in a December win at Arsenal, where City were 3-0 up and out of sight by half-time. De Bruyne clattered home a rising strike to open the scoring and netted a second from outside the box, having set up Raheem Sterling to score in between. The cross for the England forward was deflected, robbing De Bruyne of another assist for his collection – something he complained about in his typically dry, no-nonsense style.

Brilliance at the Bernabeu

This was arguably City’s finest performance away from home in Europe and De Bruyne was at the heart of everything as Guardiola’s men enjoyed the lion’s share of the contest.

That did not stop Isco giving Madrid the lead with an hour played, but the brilliant Belgian crossed for Jesus to equalise and held his nerve from the spot – never a given with City players – to secure a 2-1 last-16 win.

Like all Guardiola’s favourites, De Bruyne has shown himself to be a highly adaptable player and proved to be an intriguing option as a false nine last season, as the Blues made it three Premier League titles in four seasons.

He produced another bravura performance at Stamford Bridge in this role back in January, assisting for Phil Foden and scoring the third in a 3-1 win, which made light of a COVID-19 outbreak that had swept through the City squad.

What are your favourite Kevin De Bruyne memories? Follow our City Fan Brands Editor Dom Farrell on Twitter to get involved in the discussion and give us your thoughts in the comments section below.