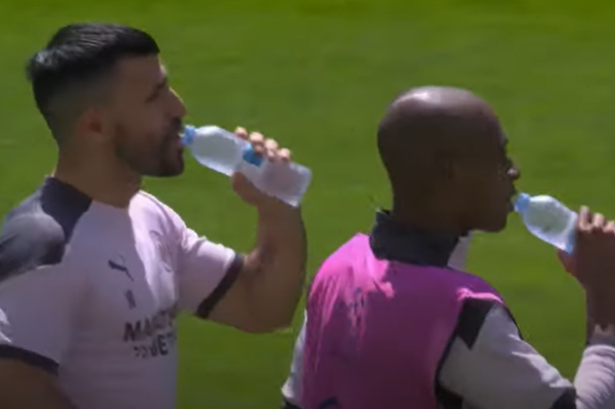 The stage is set for Manchester City ahead of their first-ever Champions League final tonight (8pm).

Having coasted to a third Premier League title in four seasons – plus getting their hands on another Carabao Cup – Pep Guardiola and his squad have a dream opportunity to clinch the big one in Portugal.

Of course, it’s a competition which the Spaniard has a rich history in with former club Barcelona.

However, despite their dominance on the domestic scene, this is the first time City will take part in the biggest game in club football.

Here are four things we spotted from their final training session before the game.

Kevin De Bruyne is one of the best players in world football – but even the mercurial Belgian doesn’t get things right 100 per cent of the time.

After showing off his ‘keepy-uppy’ skills during the warm-up in City’s pre-final training session, the midfielder turned ‘false nine’ was spotted trying to nutmeg one of his coaches.

De Bruyne was given a free opportunity to do so, but on this occasion his pin-point delivery let him down. You can count the number of times that’s happened, since his return to England, on one hand.

Whatever role he plays in this Chelsea showpiece, the club’s record goalscorer Sergio Aguero has already left City fans with a fitting memory of what he has achieved over 10 years at the Etihad Stadium.

Having been reduced to a bit-part role all season, the prolific Argentine came off the bench to score twice during his Premier League swansong against Everton – but is there one final moment of magic left in him in Porto? If so, it would be a script worthy of Hollywood status.

As things stand, this is the final game Fernandinho is contracted to City for – but he is expected to pen a one-year extension and continue his Blues career into next season.

Ilkay Gundogan was City’s only real injury concern heading to Portugal – and the German midfielder has suffered a late blow to his chances of appearing tonight.

The 30-year-old has been in sensational form this season. Incidentally, he is also the only player in this squad who has previous experience of what it’s like to play in a Champions League final.

Gundogan took part in the warm-up and during training itself. However, he left the session early after a coming-together with Fernandinho.

Ederson put through his paces

David de Gea ignored his penalty notes three times as Manchester United were beaten 11-10 on spot-kicks by Villarreal in the Europa League.

Whether the Champions League showpiece reaches that stage or not, Ederson will have an equally big part to play. Although the camera didn’t pick up him and the goalkeeping unit practising penalties here, the Brazilian looked particularly sharp as he was put through his paces at the Dragao Stadium.

What is your score prediction for tonight’s game? Let us know in the comments section.