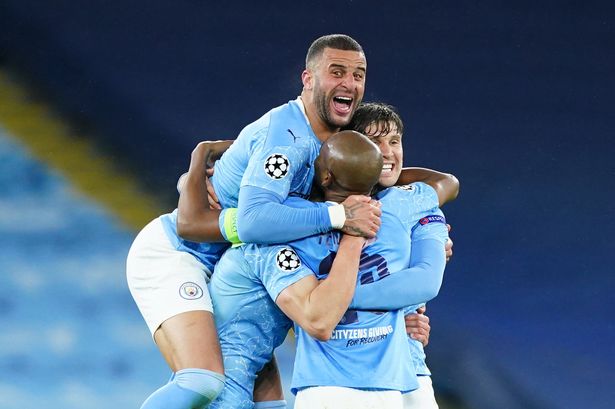 Manchester City have rolled out the red carpet all week to try and give Sergio Aguero the send-off that a Premier League A-Lister deserves.

It was decided that the deadly striker would lift the trophy with Fernandinho and then have a special presentation after the Everton game where he could say as big a farewell as restrictions would allow. While nearly all of the seat covers inside the Etihad were removed to welcome back supporters, one popped up just below the scoreboard thanking Aguero for everything he has done for the club. Unable to play the full game because of injury, the player got to decide whether he would start the game and come off or be substituted onto the pitch and got a guard of honour from both teams before kick-off.

However much love Pep Guardiola or his teammates can show him though, Aguero will not forget the affection shown to him by the 10,000 lucky supporters inside the Etihad.

This was, in part, a day for fans and team alike to celebrate. The players got to lift the Premier League trophy in front of fans who had been locked out of stadiums all year; as they did their bit by staying at home, their football club held up its end of the bargain and gave them plenty to cheer about from their sofas.

Where were you for 93:20? Relive the glory in the comments section.

But if fans relished the feel of being able to watch their team again, the day was really all about one player in particular.

When the team bus was temporarily halted on Ashton New Road before kick-off, it was because hundreds of Blues were surrounding it, waving Argentina flags and singing for Sergio Aguero. The second he came out to warm up, how the stands rose as one to acclaim him.

As he appeared on the touchline in the 62nd minute ready to come on, the noise grew deafening. There were boos and whistles as Everton players kept the ball, delaying a substitution, then more boos as City regained the ball and didn’t just boot it into the stand. You suspect John Stones will quickly forgive them.

When he dribbled his way into the box and poked home City’s fourth, the feeling inside the stadium was euphoric and all of the collective troubles of the last year momentarily washed away as everyone united in heartfelt devotion for a man who has earned every single thing said about him. It got even better too as he headed home his 184th Premier League goal to overtake Wayne Rooney as the player with the most goals in the competition for a single club.

Guardiola has been unable to give Aguero the sporting sendoff he would have wanted. As the manager has said, he will have to be cold when he thinks of his final XI for the Champions League final in Chelsea and the striker simply hasn’t been fit enough to earn a start. Even an impact off the bench seems remote.

But that only makes the fanbase even more determined to ensure Aguero knows just how much love there is for him. They sang his name at Wembley in the Carabao Cup final and they serenaded him all afternoon here. Having been unable to say farewell to David Silva last season, and denied the opportunity to come together to mark the passing of club greats such as Glyn Pardoe and Colin Bell, here finally the City fans could show Aguero how treasured he truly is.

“Thank you Sergio, you changed our lives” read one of the many banners to Aguero around the ground.

As he headed off into the Etihad tunnel for one last time as a Blue, he can leave Manchester knowing with absolute certainty that so many hearts are full of love for him and for the monumental things he has done for the football club.