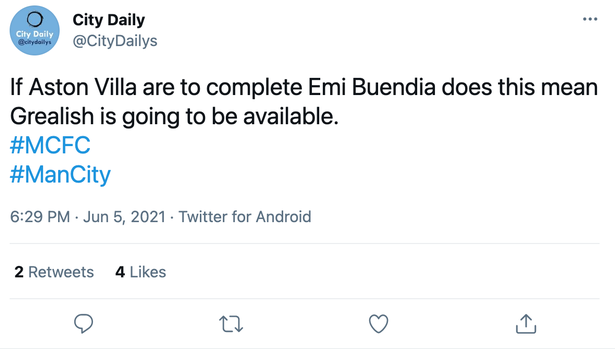 The Jack Grealish to Manchester City transfer story is already shaping up to be one of those long-winded sagas.

After all, he is an exceptional talent who looks to have the ability to play for one of the top clubs in England, or elsewhere for that matter. However, he’s Villa’s star player, their golden boy, so it will take a big offer — rumoured to be in excess of £100m — to prize him away from the club.

Then you have to consider Grealish is boyhood Villa fan as the added sentiment makes leaving the club that little bit more difficult, and thus, makes negotiations even harder.

Still, fans are entitled to get their hopes up, and that’s exactly what’s happened, especially after news emerged that Emiliano Buendia is closing in on a club-record switch from Norwich to the midlands club.

The Argentine midfielder was named the Championship Player of the Season following the club’s promotion back to the Premier League, and Villa have reportedly agreed a £33million fee for his services.

Barring a disaster, it seems Buendia will join the midlands club. Dean Smith’s side could be planning for him to line-up alongside Grealish in a bid to bolster their attacking ranks, or this could just be a solid long-term replacement, and an indication that Villa are willing to part ways with their beloved captain.

City fans would like to think the latter and some already have, as you can see below:

Pep Guardiola will certainly be looking to strengthen this summer after his side’s narrow Champions League final defeat to Chelsea in Porto, and Grealish arguably fits the mould perfectly. A versatile creative that can play on the wing or centrally, who can link-up play in a way that befits Guardiola’s style, and a player who can chip in with goals from open-play or set pieces.

The question is, just how much are City willing to test Villa’s resolve?