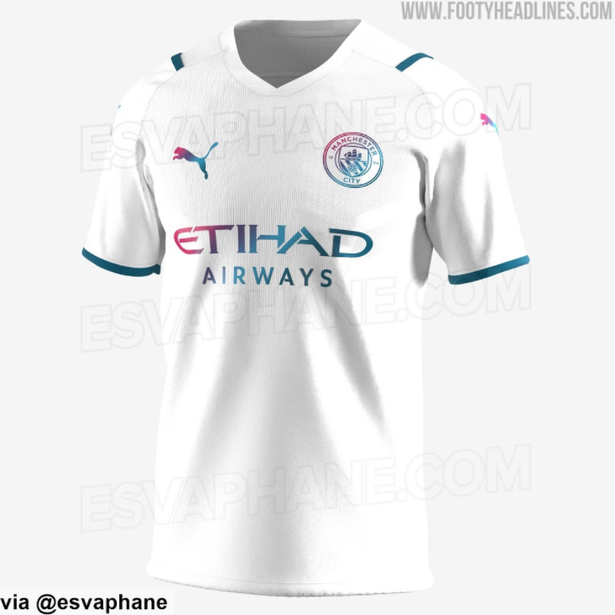 Manchester City’s new 2021/22 home and away kits for next season have been ‘leaked’ online.

The Blues will attempt to defend their Premier League title for the second time under Pep Guardiola next term and the kits they’ll wear can now be revealed, with Footy Headlines claiming to have images of all the new shirts – including a controversial third kit.

Etihad Airways have sponsored City’s shirts since 2009 and their deal rolls on into this new campaign. The new ‘leaked’ home shirt that Guardiola’s side could wear next season is a simplistic design with the club’s famous sky blue base and white trim used cleanly.

The inside of the collar of the shirt commemorates Sergio Aguero’s career at the club, showing 93:20 in white text as a nod to Aguero’s history-making goal against QPR in 2012 that won City the Premier League title, which is a fitting tribute to a legend.

The away shirt for next season has also been ‘leaked’ online and it’s an interesting design, with a white base combined with ‘Ocean Depths’, which is reportedly a shade of blue with elements of teal and green, although pink is also used on the shirt.

The contrast between the white and mix of colours is said to make the City badge, Puma logo and sponsorship appear vibrant.

What do you think of the ‘leaked’ Manchester City kits for next season? Let us know your thoughts in the comments below.

Now, while opinions on kits are, of course, subjective, this supposed City third kit for next season might cause some controversy because the City badge isn’t included on the design and the shirt is arguably reminiscent of training ground apparel.

The shirt has ‘Man City’ emboldened across the front with two sky blue parallel lines running alongside.

The leak claims the 2021/21 third shirt will feature just the club name instead of the crest while all other logos on the shirt, including the Etihad Airways sponsorship and Puma trademark, will be white and it’s said to be scheduled for release in August 2021.

While this kit may be met with scepticism, leaks have surfaced showing similar Puma templates without badges for other clubs, so make of that what you will.