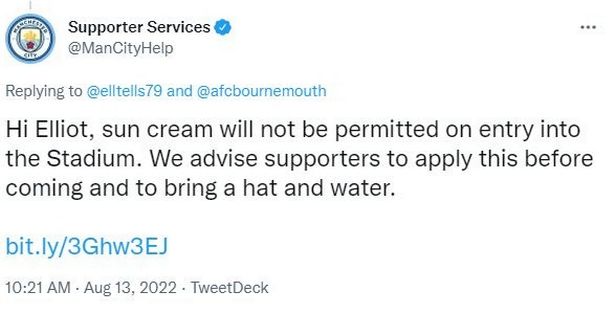 Fans have blasted Manchester City after they told supporters they could not bring sunscreen into today’s game against Bournemouth at the Etihad Stadium, despite the extreme weather.

The game kicked off at 3pm today (August 13), when temperatures across Greater Manchester were reaching highs of around 32C.

Ahead of the game, Manchester City’s Supporter Services tweeted that spectators at the game could bring in a 500ml disposable water bottle with them to the game in order to ‘stay hydrated’. In response to the tweet, fan Elliott Levy asked: “Genuine question – can we bring in suncream? I’m in East Stand lower and the sun will be beating down.”

READ MORE: ‘He had friends all over’ – tributes to Manchester’s first homeless tour guide

In response to the tweet, @ManCityHelp replied to say sun cream could not be brought into the stadium. The response said: “Hi Elliot, sun cream will not be permitted on entry into the Stadium. We advise supporters to apply this before coming and to bring a hat and water.”

Elliott, under the Twitter username @elltells79, replied: “Seriously? On a day like this, I think you need to urgently have a rethink. The East Stand lower tier is going to be drenched in 30 degree heat all afternoon and you’re telling people that they’re NOT ALLOWED to bring sun cream? We have to bake in it for 2 hours with no shade?”

Manchester City has since confirmed that people were allowed into the stadium with sun cream, despite the tweets.

The tweet was met with outrage from other fans who also questioned the ‘ridiculous’ decision. @Steptoesyard said ‘appalling this’, while @AlexanderBhoy88 described the move as ‘appalling behaviour’.

@TeamDorling tweeted: “Why on earth are you banning suncream in a heatwave?! You worried the fans are going to prevent the players from getting skin cancer?!”

@Azul_76 posted: “Ridiculous. Recommendation is to apply sunscreen at least every two hours If the reasoning is ‘supporter safety’ what about the safety when in the sun during or after the game? Not everyone goes straight from home door to the ground & back either.”

@sheffjim asked: “Have you not heard there’s a heatwave at the moment?”. @nclsks_ wrote: “Uhhh sorry what? Ah yes lads so basically you have no other choice but to burn in 30 degrees heat, that is the most ridiculous thing I’ve read all day.”

One fan replied to the post to say they were travelling with a relative who recently had skin cancer, with @ManCityHelp replying to the supporterasking them to email over details if they needed to ‘bring anything into the Stadium for medical reasons’.

The response received further reactions from fans, with @M35Blue saying: “Seriously you expect everyone to email to bring in sunscreen!!”. In response, @ManCityHelp said: “Not everyone, no. If you need to bring a prohibited item into the Stadium for any game, due to medical reasons, you can do so by emailing our Access Team”.

On Sunday (August 14), Manchester City said the initial comment about sun cream being prohibited was part of an ‘administrative error’ and people were allowed into the stadium with sun cream.