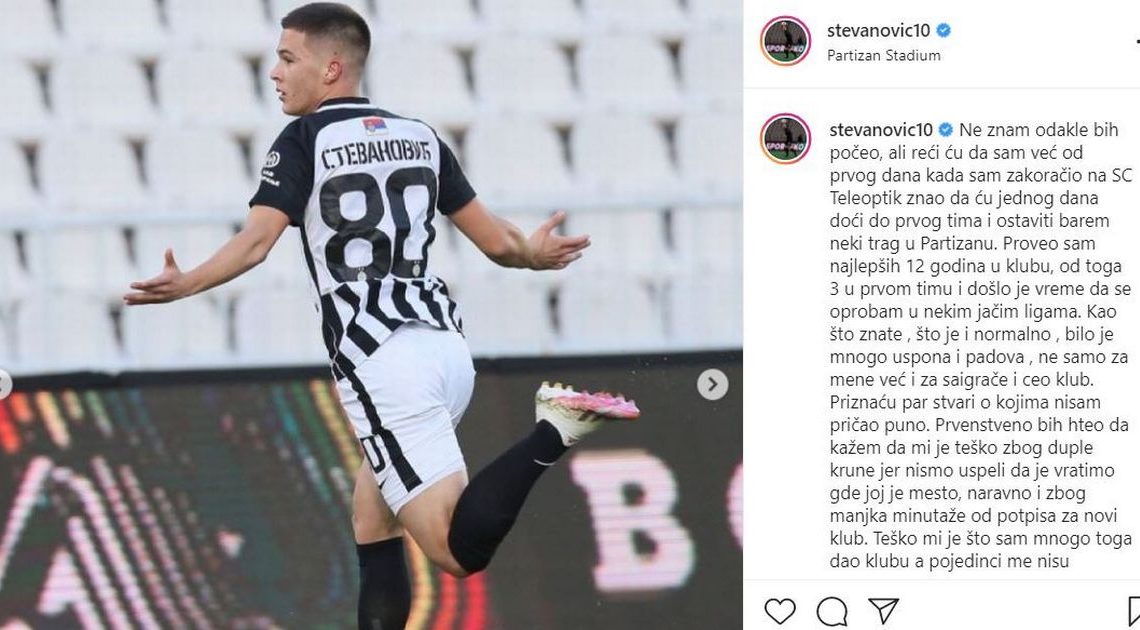 New Manchester City signing Filip Stevanovic has made a series of accusations against boyhood club Partizan before his move to the Etihad.

City won the race to sign Stevanovic in January, before the highly-rated winger returned to the Serbian side on loan for the rest of the season.

However, Stevanovic played only ten of 19 games in that spell, with only one start. That is compared to 19 starts in the first half of the season.

And as his loan spell at Partizan comes to an end, and he prepares to head to Manchester for the next stage of his career, Stevanovic took to Instagram to accuse his former club of a lack of respect and humiliating him.

He posted: “I don’t know where to start, but I will say that from the first day I stepped on SC Teleoptik I knew that one day I would get to the first team and leave at least some trace in Partizan.

“I spent the best 12 years at the club, three of them in the first team and it was time to try myself in some stronger leagues. As you know, which is normal, there were many ups and downs, not only for me but also for my teammates and the whole club.

“I’ll admit a couple of things I haven’t talked about much. First of all, I would like to say that it is difficult for me because of the double crown because we did not manage to get it back where it belongs, of course also because of the lack of minutes from signing for the new club.

“It is hard for me that I gave a lot to the club and individuals did not respect me at all. It’s hard for me because I worked hard to get back to the old way and be in the starting 11 again.”

Stevanovic went on to take particular issue with a two-minute appearance at the end of Partizan’s 1-0 Belgrade derby defeat to Red Star, while he was an unused substitute against their big rivals in the Serbian Cup final defeat on penalties.

Repeating his claim that signing for City affected his playing time in the last few months, Stevanovic continued: “It’s hard for me to try to prove myself more and more every day even though everyone knew my abilities.

“I would not comment on the minutes of 10 or 20 minutes because it is not up to me, but I justify my releases due to the lack of it, especially from the last derby and the entry of 3 minutes, and I think you all remember my games in any derby.

“It’s humiliating for me and I don’t think I deserve something like that. I endured a lot exclusively because of my Partizan.”

City will decide the best pathway for Stevanovic when he arrives at the CFA, having allowed him to return to Partizan in January. He could join the number of youngsters on loan at City’s network of sister clubs to gain more experience, or could alternatively become part of Enzo Maresca or Carlos Vicens’ academy sides.