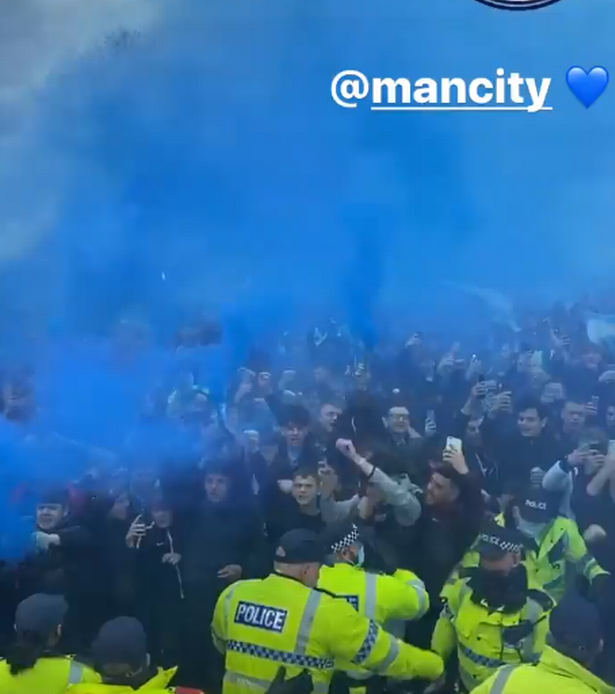 Sergio Aguero joked about staying at Manchester City as he walked down the Ethad tunnel for the final time after scoring a brace against Everton.

Aguero came off the bench to score a brilliant brace in the 5-0 win, overtaking Wayne Rooney to become the Premier League’s top scorer for a single club. He signs off a superb domestic career in England with five Premier League titles, and is the most decorated player in City history.

After the game, City lifted the title, before a presentation was made to Aguero on the pitch. Pep Guardiola later revealed that Aguero is bound for Barcelona to play alongside Lionel Messi.

On a day of celebration, this is what we spotted from the post-match festivities from inside the ground and on social media:

As Aguero walked down the tunnel after receiving his latest Premier League medal, Sky Sports cameras caught him joking with a member of staff.

‘Hey, if I stay two more years…’ he started, before the sentence became inaudible and Aguero walked off laughing, seemingly asking if he’d get another presentation if he stayed at the Etihad.

City also posted a video of Aguero walking to the dressing room after his farewell speech, blowing a kiss to the camera, tapping the wall of the tunnel, while he shared a word with Kevin De Bruyne at full time.

Inside the dressing room at full time, as City players prepared to lift the trophy, Ruben Dias walked in and had a strong message for his teammates ahead of the Champions League final.

He shouted: “Come on boys, one more to go! One more to go!”, while Ederson posed with his Golden Glove trophy along with fellow goalkeepers Zack Steffen and Scott Carson.

A goal fitting of Aguero’s time at City

When Sergio Aguero headed home from Fernandinho’s pinpoint cross to set the Premier League record, he capped off a 42-pass move from the Blues in a dominant display. That was the longest passing move leading to a goal since Ilkay Gundogan’s derby goal against United in 2019, which was 44 passes.

Aguero was reluctantly at the centre of all the attention at full-time, and when he was interviewed on the pitch he asked if he could cut the interview short when the microphone didn’t work. Then, when his famous title-winning goal vs QPR was brought up, he gave a brilliant response: “I remember that game, I played s***.”

Pep Guardiola ensured that all the attention after the game was on his team, even if his teary tribute to Aguero went viral. After collecting his Premier League medal, Guardiola joined his staff in a Guard of Honour for the first team, and watched on with a big grin as they lifted the trophy.

After allowing his players to take the limelight, and fulfilling his media duties, Guardiola finally got his hands on the trophy and had pictures taken with all of his staff, family and friends.

He also made sure to get a picture with the academy players who have featured in first-team training this season, including Liam Delap, Cole Palmer, Tommy Doyle and Felix Nmecha.

The last few home games have seen City fans line the short journey from the CFA to the Etihad and welcome the team coach into the ground. This game was no different, with the coach being held up due to the sheer number of jubilant Blues fans.

And as the crowd sang, Joao Cancelo filmed the scenes from inside the bus, with other players laughing in amazement and joining in with the ‘Championes’ chant.