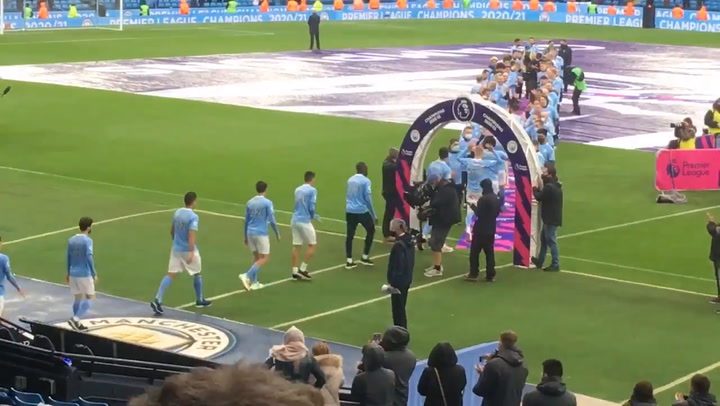 Raheem Sterling believes that whoever Manchester City sign to replace Sergio Aguero this summer will have a difficult task in filling the Argentine’s shoes.

Aguero will leave City this summer after a trophy-laden decade upon the expiration of his contract.

Although the 32-year-old has endured a difficult season of injuries he managed to wave goodbye to the Etihad in style on Sunday as he came off the bench to score two lovely goals in the final game of the Premier League season against Everton.

The strikes extended Aguero’s lead at the top of the Blues’ scoring charts and also saw him beat Wayne Rooney ‘s record of scoring the most goals for a single club in the Premier League.

It’s understood that City are looking for a new striker to replace their record goalscorer this summer, with Harry Kane and Erling Haaland among the top targets.

Sterling believes whoever arrives at the club will find it tough to live up to Aguero’s legacy.

“He is one of those players who will go down in history at this football club and in years to come people will talk about him like they are today.

Kane or Haaaland? Who do you want City to sign this summer? Tell us in the comments!

“He’s a legend. [For someone] to come in and try to replace him and fill into his shoes will be quite a big one.”

Aguero will be hoping to leave City on the best possible terms by helping the club win the Champions League for the first time in their history against Chelsea on Saturday.

Sterling explained what the tournament means to the club.

“City is a club that is looking to build on its history,” he added. “In recent times we are doing that.