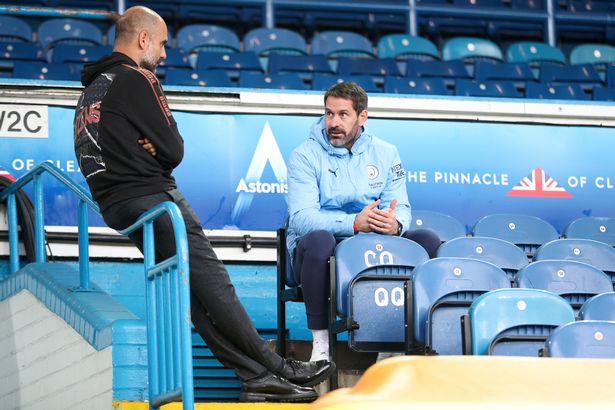 Chelsea keeper Edouard Mendy has been warned – facing an Ederson penalty is like staring down the barrel of a 30-pounder cannon.

Manchester City reserve keeper Scott Carson should know, he has faced a few thunderbolts from the left foot of the Brazil keeper, and can vouch that they are very painful if you somehow manage to get in the way.

Not that you get in the way of many, as Carson says the Blues stopper finds the inside of the side netting with unerring accuracy.

So if Saturday night’s Champions League final comes down to a penalty shoot-out, Ederson will fancy himself to be the hero by both saving and scoring penalties.

Veteran Carson is the only player in the current City squad with a winner’s medal, from the time he sat on the bench during Liverpool’s momentous comeback victory against AC Milan in 2005.

And, while only a calamity in the next few days would see the 35-year-old have to pull on his gloves in earnest again, the popular Carson feels he still has a role to play, over and beyond helping Ederson and the rest of the squad practise penalties in case Chelsea do take it down to the wire.

Not that he relishes the chance of facing Ederson on the training field again.

Ederson has already told manager Pep Guardiola that he would take penalties, even in a normal game, like his Brazilian hero Rogerio Ceni, who scored an incredible 131 career goals for Sao Paulo – including 21 in one season alone – all from penalties and free kicks.

No doubt he will put himself forward to take one if the game in the Estadio do Dragao does end in a nail-biting finale.

And Carson thinks the 27-year-old will smash it if he does take one – quite literally.

“He has smashed a few at me and Zack and it’s one of them where you actually want him to score, you don’t want the ball to hit you because he smashes it that hard,” says Carson.

“It does hurt! He takes a few every now and then and seems to find the side netting every single time, and with the power. It’s incredible.”

Carson says there will be shoot-out practice this week, despite the fact Guardiola often seems to regard the notion of planning spot kicks with disdain, beneath his pure football principles.

The big Cumbrian, who was on the winning side in the joint longest shoot-out in English football history – a 14-13 triumph for Derby over Carlisle in 2016 – says that no matter how much preparation you do, luck and intuition play a big part on the night.

“Every day after training finishes, the lads will come and ask for a couple of penalties and the keepers try to make sure they do it properly,” said Carson. “The training ground is different to a stadium with fans and pressure, but we just try to keep them honest and make them do it properly.

“You can watch videos of past penalties but it’s just instinct on the night, and who keeps their nerve.

“Xabi (Mancisidor) the goalkeeping coach will have the iPads out with past penalties – that’s normal stuff everyone does now. But that can only help you so much, as you don’t know what’s going to happen. You have to do it on the day – it can be about luck.

“But it’s a great position to be in as a goalkeeper because you can come out as the hero.

“When the shoot-out starts, you are enjoying it, but when the numbers start to go up – eight, nine, ten – then you think ‘I’m going to be taking one soon if I don’t get my finger out!’

“That’s when it starts to get a bit nervy, as it’s a situation you’re not used to, out of your comfort zone.

That England under-21 shoot-out was another saga, as a Three Lions team that included Nedum Onuoha, James Milner and Ashley Young, went out of the European Championships 13-12 after Anton Ferdinand’s miss.

City fans love Ederson’s booming passes, and would dearly love him to score the winning penalty in a Champions League final – but few people outside the Goalkeepers’ Union want games to come down to such a nerve-shredding climax.

But Ederson also has the capacity to be the hero in the context of the game – his extraordinary ability with his feet often means he gets under-rated for his goalkeeping abilities.

Says Carson, who has worked alongside top keepers like Paul Robinson, Pepe Reina, David James, Robert Green in a career which includes four England caps and spells at Leeds, Liverpool, Aston Villa and West Brom: “He’s one of the best, if not the best I‘ve worked with. When I go through all those I have worked with, there are things you can pick holes in, but Eddy is right up there because all-round he’s top-class.

“Everyone knows how good his feet are but he comes in every morning, is in the gym and works hard on the training ground, always wanting to improve. I can’t speak highly enough of him.”

Carson knows that, barring a Covid outbreak or an injury calamity between now and Saturday, his role will be what it has been all season, offering vocal encouragement from the sidelines, keeping up morale, and lifting the spirits in a squad where he is very popular.

That was shown by the acclaim which met Guardiola’s decision to hand him a debut against Newcastle last week, when he was greeted by Ederson’s affectionate headlock after being faultless – and saving a penalty – in a 4-3 win.

That was his only appearance in two seasons at City, and the fact that Carson is always at the heart of the fun in itself serves as a reminder to anyone feeling sorry for themselves at not being in the team, that this is a squad enterprise.

And Carson revealed that he sees part of his job as being to help foster the togetherness which has carried this group of players to a Premier League title and Carabao Cup, and now into a Champions League final.

“I just need to be how I am day in, day out, just going about my business, still having a laugh and a joke with the players and keeping them as relaxed as possible,” he said.

Who would you like to see taking City’s penalties if it goes to a shoot-out? Have your say in our comments section here

“You can’t change too much, it’s just about trying to keep it as normal a week as possible.

“Up until this season and last season I haven’t enjoyed watching from the bench but obviously since coming here I knew my role and that I wouldn’t have too many opportunities.

“One thing, with no fans, the players and staff on the bench have all been off their seats shouting, trying to support the lads, and that sums this group up.

“Whoever hasn’t been playing has been supporting the lads all the way, and that is one of the main reasons for our success.

“Some will be disappointed on Saturday and it’s half my job just to make sure no one is sulking and they are supporting the lads. They could be on the field in five minutes and hitting the winner, so you have to keep your mind right. You just never know.

“I’ve only been on the pitch once but hearing the support from players on the bench – it’s a really close-knit group where everyone gets on with everyone.

“It gives you confidence that everyone is there cheering you on and everyone has the same goals which is more important than just one person’s appearance.”

And if City pull it off, they have a monster celebration in mind, having been restrained following the Premier League trophy lift and Sergio Aguero’s farewell on Sunday.

“It was straight back home afterwards,” said Carson. “Without the Champions League final it would have been different but all eyes are on the big one on Saturday and I’m sure, fingers crossed, we get the win and can have an even bigger celebration after the game.

“After Leicester beat Man United and we won the title, we all met at the training ground and we all said after that, it was enough, as we want to leave ourselves right for the final, and don’t let anything get in the way.

“And obviously there’s still Covid around so it was a case of everyone being careful. No-one wants to miss Saturday just for a couple of beers. We’re all focussed on the final.

“And I’m sure that if we win our first final on Saturday, Sergio will be in the middle of the celebration that follows!”