This is the story of Sergio Aguero’s Man City career 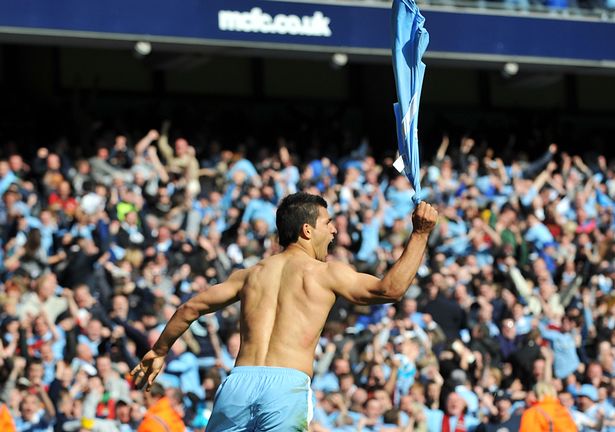 Manchester City fans have named their dogs and cats – and even their children – after him.

He has broken hearts and mended them. He hit Manchester football culture like a whirlwind and left a legendary, indelible mark on the history of the English game.

And he has scored goals. Lots of them. Only three players – Alan Shearer, Wayne Rooney and Andy Cole – have scored more of them in the Premier League era, and each of them played considerably more games than Aguero.

The stop-start and surge of pace that takes him past transfixed defenders, the close control that squeezes space from a packed penalty area, and the lethal lightning bolt of a shot that flashes past goalkeepers, making the sharpest of reflexes powerless.

And in his finest moment, the surreal instant when the world stood still and a flash of blue darted in amongst the red-and-white quarters of Queen’s Park Rangers and sent the disbelieving, despairing City fans into the realms of football fantasy, he was called a “f***ing idiot” by Mario Balotelli!

The soul of the Blues, and that of Kun, the squat, smiley assassin from Buenos Aires, were melded together, inseparable.

The last decade has thrown up many heroes – the worldly heart-on-sleeve bravery of Pablo Zabaleta, the trenches leadership of Vincent Kompany, the sublime, swoon-making skill of David Silva and the unstoppable force of nature that was Yaya Toure.

But Aguero has captured hearts like no other, with his shy grin, easy-going nature off the field, and his dead-eyed sniper’s instinct on it.

From the moment he made his debut for the Blues, scoring a poacher’s goal, brilliantly setting up David Silva for another and then capping it with a thunderous strike from 25 yards, it was clear something special was afoot.

“You could see straight away that he was special,” said Michel Vorm, in goal for Swansea that night, the first keeper in England to feel the full force of the Argentine phenomenon.

“That this small guy could generate so much power in his legs and for me it was like, ‘OK, he has poached a goal, made another and can hit them from anywhere’ – not a bad first 30 minutes or so in the Premier League!

“We all knew he had quality, but to start like that and show different elements from his locker was pretty impressive. And now, 10 years later, he has shown that he’s one of the best strikers to ever play in the Premier League.”

It was just a start. He scored 30 goals in his debut campaign, the first City player to pass that golden mark in the top flight since Francis Lee, 40 years earlier, and the last of his tally was that dramatic winner, 93 minutes and 20 seconds into the final game of a breathtaking season.

Aguero takes up the story himself, in his autobiography “Born to Rise”, describing the moment Balotelli played the ball into him, with a wall of defenders in front.

“There was no room to shoot but I saw a chance to burst into the box instead,” he said. “As I pushed the ball past Taye Taiwo, I felt contact on my right foot and in a microsecond, I had to decide whether I carried on or went down looking for a penalty – the contact was only slight so I continued on.

“This was it, the one chance I’d hoped would come and I had to make it count, so I hit the ball as hard as I could and hoped for the best.

“I remember seeing the ball hitting the back of the net, hearing a deafening roar and things are hazy after that! I pulled off my shirt and wheeled away swirling it above my head as I went a little crazy. I knew that the time was up and that goal was going to win us the title but the shock didn’t set in until my teammates dragged me down onto the ground and started telling me they loved me. Mario grabbed me and said, “You f***ing idiot! I love you big b****cks!”

“I can barely recall lining up to kick off again and the next thing I knew, I could see people celebrating and was aware of people running onto the pitch but I was still a little dazed and was thinking ‘what’s going on?’ City fans were coming up and hugging me and telling me they loved me and thanking me but I was still in shock with it all.

“I suppose I felt a little crazy and looking back, I think, what an idiot! I could have just celebrated the day and the events after the goal in a normal way but the truth was I was too far gone. We had done it, but in the most dramatic way imaginable and I don’t think any of us had anything left at that point.”

With Manchester United players preparing to celebrate on the pitch after winning in Sunderland, it was a moment which, like no other in City history – and like few others in world football history – took supporters from the depths of hellish despair to the highest vaults of Blue heaven.

People danced and hugged each other, they cried and laughed, the noise which swelled around the Etihad threatened to reduce the stadium to happy rubble.

To win it was great, to win it in the last minute was unreal. And to win it by snatching it from under the noses of the oldest enemy, was simply sublime.

That moment alone was enough to ensure Aguero his own place among the never-to-be-forgotten City greats, but there was no resting on laurels.

Having been the final piece in the title-winning jigsaw for Roberto Mancini’s team, Aguero also excelled for Manuel Pellegrini, averaging almost 30 goals a season during the Engineer’s three campaigns with the Blues.

But it was under Pep Guardiola that he truly flourished, despite the fact that he found himself challenged as never before.

Aguero had become used to being the goalscorer at City – he had evolved from the number ten role he played at Atletico Madrid, a player who could drop deep and link up play as well as get on the end of chances.

That was the Aguero Guardiola remembered from his La Liga days at Atletico Madrid, where he had frequently been a thorn in the side of his great Barcelona team.

The City manager set about turning Aguero back into that consummate all-rounder, by asking for a higher work rate and more involvement in approach play, rather than playing off the shoulder of the last defender.

It was a risk – the affection for Aguero in the hearts of the fans meant he was a surefire winner in any dispute between player and manager, especially in a difficult first season when Joe Hart’s departure and some ordinary results had City fans dubious about Guardiola.

Every summer after his arrival, transfer speculation had surrounded Aguero – even in the weeks after his signing, there was a claim it was simply a ploy to get him to Real Madrid, as Atletico would not sanction a direct sale.

And in every transfer window, he was linked with Real, Barcelona, Juventus or Paris St Germain, while he quietly got on with life and football in Manchester, enjoying being away from the glare of publicity in Spain.

But, in the earthly months of 2017, it was clear things were not right.

Aguero normally breezed through the mixed zone – where the media hopefully tried to persuade players to stop and talk – with an apologetic smile.

Suddenly, he began to stop and talk to Spanish-speaking journalists, entertaining the possibility that he could leave – he made it plain the ball was in City’s court.

A dinner with Guardiola cleared the air, and Aguero embraced the challenge, winning his place back from Jesus and finishing the season with a career-high 33 goals.

He was still a tremendous goalscorer, but was now a creator and first defender as well, and City thrived on it.

In Guardiola’s first title season he contributed another 30 goals despite injury problems and then added 32 as City held off the challenge of Liverpool the following year.

But with a long history of injury issues appearing to catch up with him last year, the decision was taken not to offer him a new deal, and seek a new goalscoring hero for the Etihad faithful.

He left his mark, and at one civil partnership ceremony this summer, Aguero will warrant a special toast – as he brought the happy couple together.

Another Manchester legend, former local presenter James H. Reeve, a lifelong City fan, was among the throng who clogged up Manchester city centre in 2012 to hail the title-winning heroes.

By chance, he met up with old flame Amanda Williamson, who shared his love for all things Blue, and an old romance was re-kindled.

They tie the knot this year, and Amanda says: “We met again 20 years after we first split up and are getting civilly partnered this year. So if Sergio hadn’t scored that goal …

“We’ll definitely be toasting him afterwards.”

There will be 10,000 fans at the Etihad Stadium to say fond farewells, but they represented many, many more across the planet.

Kun has moved on, and all that will remain is a statue and a thousand memories.

And the soundtrack of Martin Tyler’s immortal commentary will remain with every Blue until the day they die.

“Aguerooooooooooo! I swear you’ll never see anything like this ever again! So watch it, drink it in.”

I swear City fans will never see anything like Kun Aguero again.